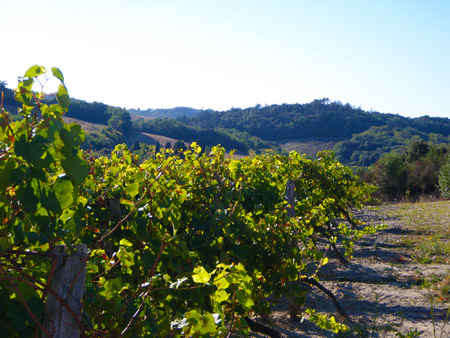 Background to the blog

Over a year ago we let most of our farmland at Cantaloup to local Malepère vigneron, Rose + Paul.  It’s a long process to establish a new part of their vineyard, but it is now well underway. At first, this blog was designed to follow the creation of the “Bio” (organic) vineyard on 12 hectares of our land, from the planting of the first vines in late May/early June 2018 to the making of the first wines from the land at Cantaloup in a few years time.

After the first few blog postings it became obvious that the blog would need to be expanded to cover existing, operational, Bio vineyards in the Arzens area, in order to cover the full annual cycle of an organic vineyard, culminating in the harvesting of the grapes, and the wine-making, so that it will become a blog about our local “Bio” vineyards, to discover the challenges they face, and the satisfaction of producing the ultimate end-product. This was a more practical approach than contemplating a blog exclusively focused on a new area of organic vineyard from which the first wine will probably only be produced in five years time.

I will continue to cover the new vineyard, with the odd posting to mark anything interesting that happens on the land, but in the meantime hope to gain the active co-operation of at least two other local vineyards, so we cover their methods and approach. The first of these is covered in a grape-picking blog on 18th September, Domaine de Bellevue just outside Arzens, our local village. Brief details are given on the vineyard below, and will be expanded as I get to know it better.

Languedoc Wines and those of the Malepère

The Languedoc-Roussilon is the largest vineyard in the world with a geographical identity. It produces annually 13.6 million hectolitres of wine, which equates to 1.8 billion bottles. This is equivalent to 5% of the world’s wine.

The Malepere AOC region is relatively recently classified. It gain VDQS status in 1983, and AOC classification in 2007. Annual output is now 32,000 hl , equating to 4.16 million bottles of wine. Only about a quarter of this wine is classified AOC, and sold as an AOP wine. The rest is a good quality IGP Pays d’OC. 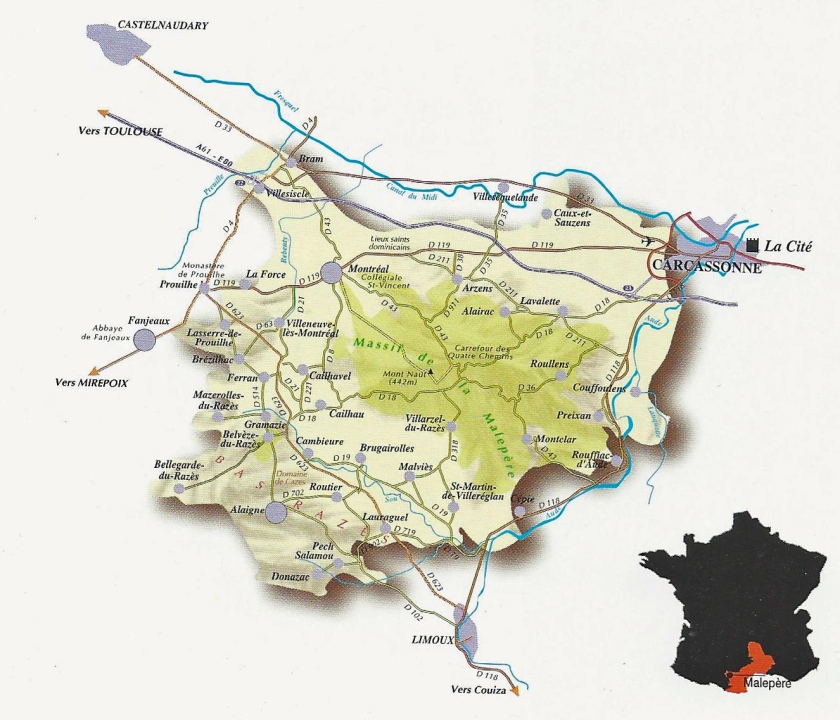 The Malepère AOC is the most western Languedoc appellation and extends around  the wooded massif of Malepère, from the gates of Carcassonne to Limoux and as far as the Lauragais. The hillsides are a mix of clay and chalky soil, with ancient gravel deposits in certain areas. The climate is halfway between that of the Atlantic, and the Mediterranean. Wines in the area, are, therefore, largely made through a careful blend of  both Atlantic and Mediterranean grapes.

But, first some details, on the well-established local vigneron who is developing the organic vines on our land:

The Rose + Paul property now extends to 70 hectares and the plots of vineyard are spread around Arzens, in the heart of the Massif de Malepère, not far from the Cité of Carcassonne. They currently have a full range of red, rosé and white wines.The recent addition of 12 hectares at Cantaloup has offered Rose + Paul the opportunity to create the first organic wine section (“Studio Bio”) of their vineyard. However, it will be five years before the first organic wines are bottled, and so in meantime the blog will focus on other organic winemakers in the Arzens area, and merely keep readers posted on the development of the new vineyard.

Gilles Foussat, and his son, Clement, work full-time on the vineyard, and Gilles wife Cathy helps with tastings (held every evening at their Cave) and sales, so it is a truly family business. 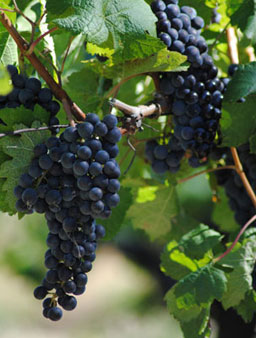 And now some details of the smaller vineyard, in the same area:

Rene Didde and Ief van Meegeren acquired the vineyard, with others, in early 2004, and combine jobs in Amsterdam with their passion for their Malepère vines activity, just outside Arzens. They have 7.5 hectares under vine. Their wine is made, and bottled, for them by an expert wine-maker near Alaigne, another wine country village.

Above are the three wines that form the Bellevue range, all organic: the Chardonnay, their two red blends (with the purple label, handpicked, and with the red label, mechanically picked). This year, 2018, they will be making their first rose wine, from a blend of an equal quantity of Malbec and Cabernet Franc.

Despite their jobs in Amsterdam, Rene and Ief find the time to devote months to the hard work in the vineyard, helped by cohorts of friends, who join them for the intensive work periods, the pruning in the spring, and harvest, in the late summer.